A Book About Death : The Collection 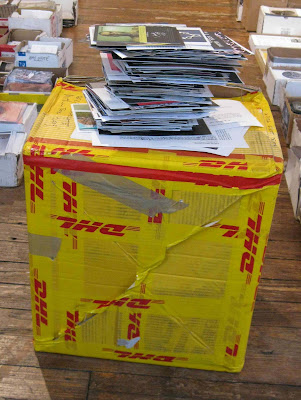 Email ThisBlogThis!Share to TwitterShare to FacebookShare to Pinterest
Labels: A Book About Death

a Film from the Opening
By Honey Millmann

sweet pile--- thanks for the opportunity! mt

Come to think of it, maybe i should send this after all... it’s coloring outsider the lines, but then that’s what it’s about... i couldn’t find the stack of postcards from some time ago which i wanted to modify personally – partly because death is lingering in the hallway again...

Missing the book of the dead the book about death – in a way it seems ridiculous to miss a rendez-vous with death, but as chance would have it death was lingering all the while I was looking for the cards that I wanted to use for the project... at first I had an idea with some images I had been keeping with their face to the wall after the death of R.L. that was difficult and difficult to bear and difficult to process... it had already been some years and I thought, well here is an opportunity to exorcise this lingering pain...
As usual it don’t work like that... circumstances colluded to hijack the original idea, even though it was just about to enter the production stage – in fact I had just made a comparison in prices and only had to decide before uploading.... what was it? A telephone call, the doorbell? I don’t remember, but the process was abruptly halted... interrupted permanently, felled with one swoop of the scythe.-

Time intervened, seeping through the cracks of each day, waiting, hospitals, which medication would be the best to keep the patient comfortable, to comfort the patient... which medication has too many side effects to be worth it, which therapy is sensible which is unnecessary - chemotherapy worthwhile? Bombardment with all kinds of rays, local, pinpoint, does the tumor recede, does it grow, another biopsy or just leave it alone?

Just sitting there all day the patient is patient even though every fiber in the affected is screaming despair and revolt, anger, fear and revulsion ... the doorbell rings – is it time?
No it’s just another neighborly call, not much to say, not much to tell excepts comments on the details of the disease or avoiding mention of it, avoiding any mention of the end, well knowing it’s listening in...

The empty boxes are stacked and waiting. Boxes or rather low crates for the walnuts that we gathered every year. I was thinking while stacking them at the beginning of summer... Will the patient make it to the time of nuts? Will the patient make it in time for nuts? Will the nuts make it? A few have been blown off by the first autumnal winds... but most are hanging on. The patient is in hospital again recovering from another emergency operation... it went well as they say, but to no avail, a postponement, prolongation, whatever... the nuts will fall, it’s only a question of time.

Excellent; I'm going to DHL tape a cardboard box to use as a side table...