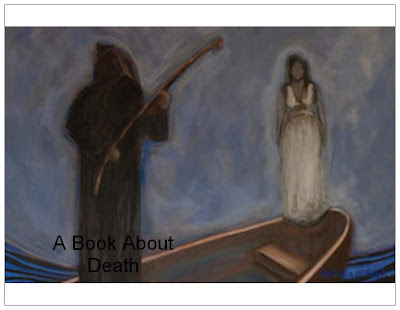 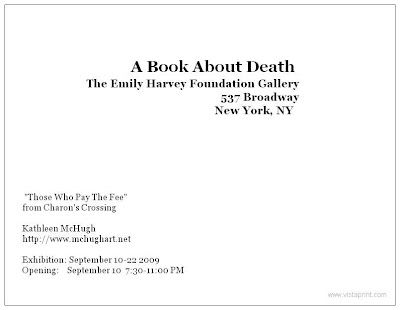 Email ThisBlogThis!Share to TwitterShare to FacebookShare to Pinterest
Labels: A Book About Death, Kathleen McHugh

Your artwork has been received by the Emily Harvey gallery.

There is an unseen circulatory system that connects people to each other and to communities. When death comes to an elderly family member or beloved pet, other people in the system reach out to help and console. It is different when death comes through violence or disease as an unjust surprise to an unsuspecting victim. The life flow of the system withdraws and shuts down. Every act of kindness towards the survivors is experienced as an extraordinary gesture. The aftermath of the event is handled by professional death managers, IE., grief counselors, prescription writing doctors, psychologists, and trauma specialists who talk about finding "the new normal". Faith communities are expected to be the providers of "meaning" for the deceased, survivors, and greater society. Death isn't contagious. Every living creature has a birth date and a death date. Yet, death separates and silences us. We ignore it, deny it, spiritualize it, and somehow think that it "happens to other people and won't happen to us if we only associate with the living". We don't know how to "be around" grieving survivors. With concern, we ask them if "they are seeing someone" and when they think they will be "ready to move on". I believe that the project, "A Book About Death" serves as an existential living document that pumps the life flow back into areas of the circulatory system which have been severed due to silence. I personally don't think that artists are avoiding subject matter, such as 9/11, because it is taboo, but rather, are including those who are living in the aftermath of violence such as 9/11, the murder of Neda Soltan, and all other unjust surprise deaths that touch the lives of countless people, in the circulatory system of the intended audience for "A Book About Death."